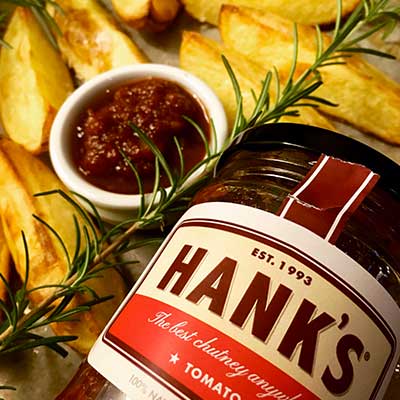 Open a jar of Hank's Tomato Chutney and decant into a serving dish. Place close to the oven to bring it to room temperature or slightly warmer releasing the aromatics.

To steam the potatoes, place a veggie steamer in the base of your largest pot and fill with water to the base of the steamer. Bring this to the boil.

Rinse potatoes and cut them length way into quarters, place them into the veggie steamer along with a few garlic cloves. Try not to crowd them too much.

Steam until just softening. We're aiming for some 'give' with a knife tip, but not all the way through.

Remove from heat, carefully drain into a colander and allow to 'steam dry' for a few moments.

Once the surface moisture is off the potatoes and garlic place them on the baking tray. Strip the leaves off 2 sprigs of rosemary (You can roughly chop one of the sprigs leaves) and sprinkle over the potatoes along with a generous pinch of sea salt flakes. Crush the garlic softly with the flat blade of a knife. Shake the pan or using tongs coat the potatoes in the mixture. You want to bruise the rosemary and release the oils and also release some garlic tones.

Place in the oven for 20 minutes and then check progress with the tip of a knife - shake the tray and turn over any pieces that need some more colour.

Return to the oven for a further 10 minutes or until you can pierce the potato with a knife. Serve with a further sprinkle of sea salt and the remaining rosemary sprigs as garnish. 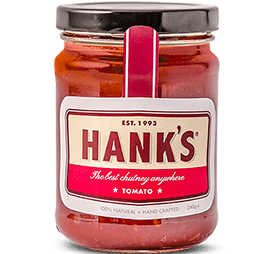